Benazir Bhutto, twice Prime Minister of Pakistan and head of that country's most popular party, has been assassinated. Choosing to participate in democratic politics in a decidedly undemocratic country, Bhutto must have well understood and accepted the dangers she faced. Her courage and commitment to democracy (if not her record of performance in government) are to be commended. 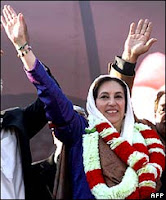 This does not bode well for the future of Pakistan. The scheduled elections for January are now thrown into question, and we have yet to hear how President Musharraf will respond. It had been looking recently that his path back to legitimate rule (following his dissolution of the government and declaration of emergency rule) would intersect with Bhutto's return to from exile. When he finally agreed to give up his uniform and run as a civilian in the next elections, he seemed to be paving the way for the logical coalition between his own great personal popularity and Bhutto's genuine electoral popularity. Now, on the other hand, the possibility of emergency rule looms yet again. Bhutto's assassination took place in the middle of Rawalpindi, Pakistan's "garrison city", the beating heart of that country's enormous military and security forces, and what ought to have been the safest place in all Pakistan. If terrorist forces have the capability of striking there, then no place is safe.

This of course does raise the question of who could have been behind this attack. Unfortunately the number of people and groups hoping to obstruct the democratic process in Pakistan makes it impossible to narrow down suspects on motive alone. Musharraf will almost certainly take some scrutiny, particularly if he can use this attack as justification to maintain his powers. Taliban remnants and al-Qaeda splinters are also possible suspects. My gut feeling, however, makes me suspect the involvement of Pakistani intelligence. One hears now and then shadowy rumor of 'rogue elements' in the top echelons of the Pakistani security and intelligence community: whispers of their involvement in bombings in India, in providing Peshawar safehouses for Taliban and al-Qaeda in transit to and from Afghanistan, in undermining Musharraf's response to the militants who occupied Islamabad's Red Mosque. I continue to suspect that Pakistan, much like Iran, is a country whose power struggles take place deep below the surface, well out of sight of the rest of the world, bubbling up in resignations, firings, exiles, and assassinations that seem strangely out of context to outside observers.

I've held for some time that Pakistan, Egypt, and Nigeria are three countries that don't get worried about enough, and three countries I would be unsurprised to find myself deployed to before the end of my Army career. I hope I'll never have to look at my little list as having been prophetic.
Posted by Bi-Coloured-Python-Rock-Snake at 10:53 AM

Email ThisBlogThis!Share to TwitterShare to FacebookShare to Pinterest
Labels: world