It's a bit of a shock, after nearly a month of leave, to be brought back to the (sur-)reality of my life by a sign like this one: 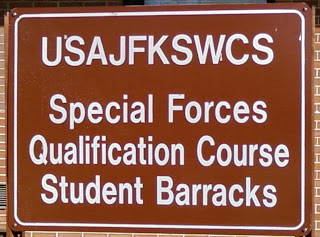 Awesome, huh? The acronym, by the way, is shortened a bit, and pronounced "swick". Why not "swicks"? Who knows. The same reason BNCOC is pronounced "bee-knock", probably.

In other news, turns out I reported early for no reason. Today we had a formation to turn in medical and personnel records to start the process, but they called out 20-some names to the side. Turns out they just took the last people to have checked in, and we won't be inprocessing until next week. So this week we'll just be sitting around doing casual details and such. Which is pretty frustrating. I had been consoling myself with the fact that I'd only be stuck in the replacements company for a few more days, but apparently that is not to the be the case. On top of that, we don't have any wall lockers in our barracks room, because the barracks is so full with all the people inprocessing. So I'll basically be living out of my car for the next two weeks. Awesome. Welcome back to the Army.

Posted by Bi-Coloured-Python-Rock-Snake at 5:01 PM

Congrats on arriving. Well look on the bright side - you don't have to live out of your car when it's -5 degrees out and your truck won't start because the battery was designed for Texas's climate (and yes, battery chemistry is different for warm and cold regions), like I did at my replacement company.

I just hope you aren't getting yelled at by other Specialists like you're in Basic again. I gave those guys about as much respect as staff-sergeants-turned-specialists-after-a-DUI deserve, and we didn't get along. But I got out to my unit quickly enough, and my platoon sergeant was able to shield me from a lot of the BS over at replacement by coming over and picking me up whenever I called him with "we're not doing anything important can I do paperwork there?" whenever I was tasked to clean the bathrooms or something. And of course, the standard sham shield tactic of "delegating" to privates and PFCs. A BDU field jacket and an assertive tone of voice is very useful for doing this.

Haha, yeah, I've managed to do decently so far. I still get the sort of mystified questionings, though: "So, this your first duty station?" "No, not technically, but my last one was still just training." "So, you came in as a specialist?" "Yeah, but I'd have it by now anyway. Been in for almost 2 1/2 years." "But you haven't been deployed?" "No. Been training for two years." "What's you're MOS again??"

And on and on in circles. I do really appreciate how the Army welcomes you to your unit with a cadre of the biggest dirtbags around. I mean, it's great and all that you used to outrank me. Let's focus on the "used to", shall we? Then there's the one PFC in the replacement cadre who's wearing it for the first time; gotta wonder who he crossed to get that billet.

I wish I had contact with my cadre at my unit; thing is, I don't even know what brigade they're sendingme to yet. Stupid limbo.