Shane alerted me to yet another reason to fear the Large Hadron Collider: apparently, Gordon Freeman works at CERN! For those not big into video games, Dr. Gordon Freeman is the protagonist of the extremely popular Half-Life series of games, in which researchers at a secretive facility accidentally open a rift in space-time, allowing montrous inter-dimensional life forms to break through onto Earth. Kind of a spooky parallel, no? I'll be scanning the news for any suspicious reports out of Switzerland in the next few days.

UPDATE: Apparently one of the villains of the game has been spotted in the CERN publicity spots as well! 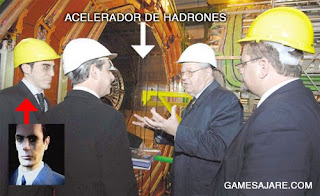 Wierd. Eerie.
Posted by Bi-Coloured-Python-Rock-Snake at 11:14 AM

You need to edit this post to add this picture, which is possibly too good to be true:
http://i35.tinypic.com/256fu4g.jpg

I never played the game but I'm told this guy is a bad guy in Half Life.