Down With Big Cul-De-Sac

I hate modern subdivisions. I hate getting lost in the cul-de-sac maze with no way to escape but to retrace my route, because Morningheatherspringwood Lane doesn't actually connect anything to anything else. I hate having to get in my car to get anywhere. And we can be bipartisan on this: Matthew Yglesias gives some progressive reasons to hate them, too, as they force people to drive far further and also make biking and walking less practical: 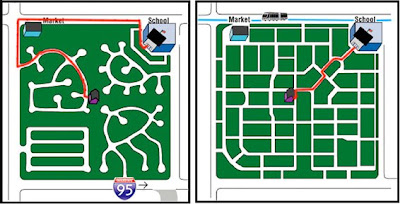 In reality, there's no reason for this to be a necessarily partisan issue. Last time I checked, the Republicans weren't in hock to Big Cul-De-Sac. And the New Urbanism is, at its roots, profoundly conservative. It is saying "lets build cities the way we did 100 years ago". Yglesias's final point is also a conservative one, or at least a federalist one: "Fundamentally, though, the role of state and local agencies is always going to be important to this kind of decision-making, and things will only improve if people pay more attention to politics at this level." Agreed.
Posted by Bi-Coloured-Python-Rock-Snake at 1:36 PM

Yeah, Yglesias and a lot of the other young DC bloggers seem to have a lot to say about how local policies can make big effects on quality of life. They're also pretty critical of overly burdensome local/state regulation, especially on licensing and zoning regulations.

On the issues of cul-de-sacs, I grew up around them. In a related story, I trespassed on other people's property on a nearly daily basis during the summer. The left side of the picture you posted is inconvenient and inefficient when driving, but incredibly time-consuming when walking from one place to another.

Oh, yeah. Hike through a few backyards and you can take the exact same path to school as in the other development. Assuming your neighbors won't call the cops on you.

I guess it's a great example of the law of unintended consequences that "curve and cul-de-sac" developments ended up being so isolating. After all, the whole idea was to foster neighborliness by insulating neighborhoods from thru traffic.