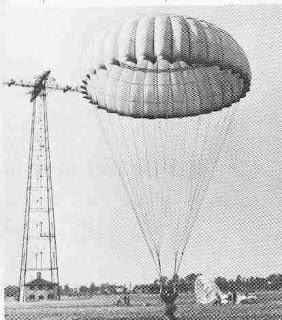 The highlight of Tower Week, the second week of Airborne School, is jumping (well, being dropped) from the 250-foot parachute training tower, which I did today. You can see the historic towers in these pictures; they haven't changed much, though one of the four was blown down in a storm in 1988. I hadn't been particularly enthusiastic about the tower, since it struck me as kind of silly and just one more chance to get injured before Jump Week. I became less enthusiastic after seeing multiple malfunctions on the tower over the course of the day, though the safety precautions worked in all cases and there were no injuries. The tower isn't a requirement of the course, see, and often many soldiers don't get the chance to do it anyway, due to weather conditions or whatnot. But nonetheless my turn came up and I was hoisted aloft and dropped, and boy I wished I could have done it again. It was a lot more fun than I expected, and I was surprisingly at ease. I'm not really bothered by heights in any case, but I was expecting the hoisting and the long moments of waiting at the top to be rather nerve-wracking. Not the case, apparently, because I just sort of relaxed and enjoyed the view. And then I dropped, and I was more focused on manipulating my parachute for a soft(ish) landing. 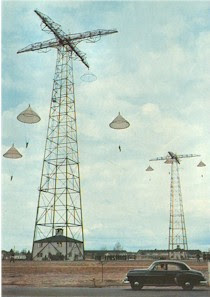 It takes less than 15 seconds to drop 250 feet, so it's really over before you know it. No lollygagging about in the sky like a civilian skydiver's parafoil, the Army's parachutes are designed to get you on the ground quickly, and for good reason. If you've seen Band of Brothers, you'll remember that in a real Airborne insertion, the sky isn't exactly a safe place to be. Not that any Normandy-style invasions are anywhere in my likely future, but that's the idea. Tomorrow we should have a short day with just a few classes, and then I'll be off for my one real weekend of Airborne school. I really have no idea what I'll do all weekend, since during the week I generally just hit the Internet for an hour and go to bed early. I'm sure I'll figure something out. And then next week is Jump Week! Five successful jumps (including two with combat gear and at least one at night), and I'll be fully Airborne qualified!
Posted by Bi-Coloured-Python-Rock-Snake at 7:03 PM

Email ThisBlogThis!Share to TwitterShare to FacebookShare to Pinterest
Labels: airborne

I'm not really bothered by heights in any case

Yeah, that's one set of genes you DIDN'T inherit from the maternal line: fear of heights.

I was prepared to heap winking scorn ("rotorheads!" "dope on a rope!") upon the mention of the 101st, since they are sort of cross-town rivals to my new unit, the 82nd. But in that generation, your grandfather would have been in the *original* 101st Airborne, before it was dissolved and recreated as Air Assault/Airmobile. So even an All-American (the 82nd's moniker) has to respect that.

Yes, I have noticed the rivalry at a Memorial Day celebration. A Vietnam vet from the 82nd said something about that! I then told him it was my grandfather I was referring to, and that he died at Bastogne.

The vet apologized, and I told him that it was OK, I understood!