Whose Babies Do We Mourn?

All the photographs in this collection "Portraits from the Congo" are deadly serious. But that didn't stop me from have a fleeting thought on seeing this picture: 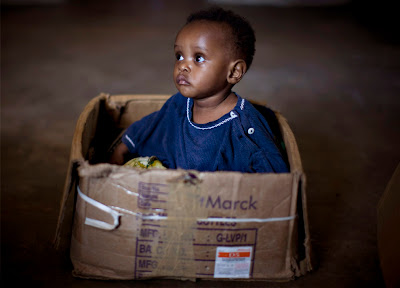 Back to a serious note, my sister wonders whether the world only cares when white babies die. I don't think that's true. It's just that which brown and black babies the world cares about is desperately subject to fashion. We care about Tibetan babies, but not Uyghur babies. We care about Darfuri babies, but not Congolese babies. And the fashions for which suffering peoples get highlighted in the international media and NGO racket seem dependent on which cases better support the worldview of those communities. A racist conflict over water and exacerbated by climate change becomes a cause celebre. Where a tyrant has, in one generation, succeeded in making the continent's healthiest and wealthiest nation into the poorest and sickest in the world? Well, you don't hear too much about that. Why not? Because what Robert Mugabe has done to Zimbabwe seems to argue — rather forcefully — that decolonization was a disaster and Kipling was right. And rather than confront ugly realities and have the difficult discussions about their implications, it's a lot easier just to focus on those conflicts that support our worldviews.
Posted by Bi-Coloured-Python-Rock-Snake at 10:44 AM

All hail to the metanarrative.

Even if it's wrong.