I love trains. Most people do, it seems. There's a sense of adventure and nostalgia to a journey by train, not to mention a degree of comfort unthinkable on a flight or road trip. It's not surprising then that high-speed passenger rail travel has attracted political attention in the Stimulus era, filling politicians' dreams with ribbon-cutting opportunities galore. But what precisely are we looking to achieve by boosting passenger rail, and will any of the current proposals get us there?
Let's pull off on a siding here for a minute before we get ahead of schedule: the politicians are talking about three significantly different systems when they say "high speed rail", and even full-time rail boosters (I'm looking at you, Infrastructurist) play fast-and-loose with the very real differences between them. Genuine high-speed rail, like Japan's Shinkansen, France's TGV, or Spain's AVE, operate at speeds upwards of 180mph but require extremely robust purpose-built track on broad rights-of-way with widely banked curves and very low grades, requiring lots of tunnels and trestles if they're to cross any kind of varied terrain. They are sources of national pride in every country that has them, but they are fiendishly expensive per mile of track laid. 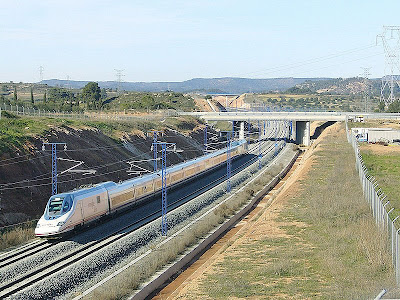 A step down is service in the 110-150mph range on separated, dedicated rights-of-way over traditional rails, such as Amtrak's popular and profitable Acela Express along the Northeast Corridor. Due to frequent stops and right-of-way conflicts, however, actual speeds on the Acela Express average only 86mph. The lowest tier of proposed "high-speed" rail won't achieve the same degree of right-of-way separation that the Acela has gained (mostly through political pressure), making even that train's modest achievement unlikely to be widely matched.

As a result, when the politicians and rail boosters talk about "high-speed rail" links, disingenuously painting visions of bullet trains zooming at 200mph across the prairies, with few exceptions what they're really talking about is, at very best, 90-110mph service with more-or-less traditional rolling stock on slightly upgraded rights-of-way. In other words, they're talking about expanding an improved Amtrak, but for obvious reasons they can't let anyone to realize that.

Most of the talk of "high-speed rail" is really just trying to resurrect the express passenger service that was commonplace in the early 20th century. There's a great piece in Slate by Tom Vanderbilt on the miserable state of rail service today as compared to the golden age of rail in the 1920s. Of course, the relative decline of rail since that time has some pretty obvious causes, namely, the rise of air travel and the automobile. Vanderbilt's unspoken implication is that, forgetting dreams of bullet-train high-speed rail, if passenger rail even provided the service it did 90 years ago it might be competitive with other modes of transit.

I do suspect he's right: despite the miserable service, even Amtrak manages to turn a profit on the Acela. But in the course of making his point he mentions one cause of the decline without recognizing how much of a stumbling block it is to a rail renaissance: we now have less than half the rail miles we had on the eve of WWI. Half the rail is carrying more traffic than ever, at lower speeds. Modern signaling equipment allows any given right-of-way to carry a volume of traffic that would have been inconceivable to Dagny Taggart, but it's not very fast. There's also no wiggle room in the system to let faster trains through, even if the rail could handle the speed, and much of it can't without upgrades. Re-jiggering schedules to clear the right-of-way for a single passenger train at 90mph would cause massive delays for every slower train on the line.

The lower-order goal of expanding 90mph rail service on existing track is achievable, then, but at what cost? Environmental concerns are a major driver of rail boosterism (trains being a shockingly fuel-efficient way to move stuff around), but our network has a finite capacity that is currently dominated by freight carriers in tight competition with long-haul trucking. Expanding passenger rail on existing track would push a significant chunk of rail freight onto our interstates, burning a lot more fuel, greatly increasing highway maintainence costs, and making driving an automobile that much more unpleasant. In any rail policy, we need to ensure that freight continues to have priority. If we succeed merely in pushing people onto trains and freight onto our roads, we'll have taken several big steps backward in efficiency, environmental sensitivity, and convenience.

The answer to all this, of course, is that if we want convenient passenger rail service and efficient freight service, we ust need to start laying new rail. However, even restoring the WWI-era rail network will be far more expensive than boosters suggest. As we've pulled up half our rail, we've tripled our population, so purchasing new rights-of-way (or seizing them through eminent domain) will be exceedingly costly. Even of those defunct rights-of-way that weren't sold off privately, many have been turned into bike trails and such. I can only imagine the New Urbanist civil war that will break out the first time someone proposes laying high-speed rail over a bike trail.

I'd love to see ground broken on genuine high-speed in America, and there are a handful of routes that might be able to achieve it cost-effectively. Hint: they're not on this map: 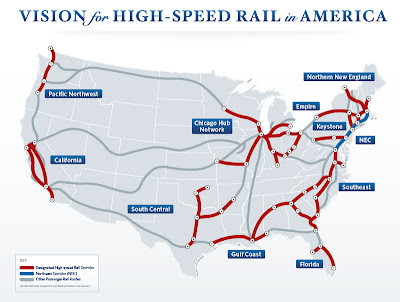 The "Texas T-Bone" corridor connecting Dallas/Ft Worth to San Antonio and Killeen/Ft Hood to Houston is one of the more logistically viable proposals I've seen, taking into account the flatness and wide-openness of central Texas. The Gulf Coast Corridor is plausible for the same reasons, although I'm dubious how much demand exists for it. Conversely, despite the potentially huge market for it, a true high-speed corridor connecting Los Angeles to San Fransisco would face such massive engineering hurdles and endless environmental litigation obstacles as to be completely laughable. Ditto for the Cascades Corridor in the Pacific Northwest.

Inter-state transportation infrastructure is a proper project for the federal government, and if they were going to do it right, I'd happily starve the ravenous beasts of federal education and health care spending for the sake of shiny, speedy trains. But as long as politicians continue to push rails at the expense of roads while grossly understating their costs and tradeoffs, high-speed rail remains an expensive boondoggle.
Posted by Bi-Coloured-Python-Rock-Snake at 12:54 PM

Email ThisBlogThis!Share to TwitterShare to FacebookShare to Pinterest
Labels: science and technology, where's my flying car