There are some people whose sensitivities are offended by the presence of uniformed policemen or soldiers in public, because they've been raised to see uniforms as symbols of oppression and militarism. In reality, uniforms are a concession to the people, and the most terrifying representatives of state power are the ones who don't mark themselves as such: 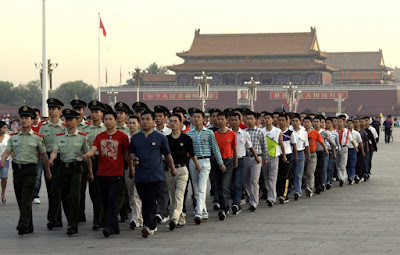 What possible message can be meant by parading plainclothes officers, other than a reminder that the eyes and ears of the Party are everywhere? 20 years after the massacre of Tiananmen, China seems to be holding its breath.
Posted by Bi-Coloured-Python-Rock-Snake at 9:43 PM

Email ThisBlogThis!Share to TwitterShare to FacebookShare to Pinterest
Labels: world