Zombie reports from Berkeley on the final acquiescence and removal of the so-called "tree-sitters", a group of hippies who have been living in a grove of trees on the U.C. Berkeley campus for the last 21 months, in order to save them from being felled to make way for a new athletic complex. It's a classic Zombie photoessay, and typically amusing. My favorite moment is towards the end: 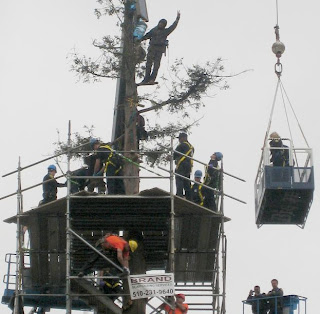 As a hilarious side note, the construction company which had built the scaffolding in record time must have seen how many people were taking photos of the scene, so two workmen quickly attached a sign to the poles to take advantage of the free publicity. Some guerrilla capitalism amidst the anarchy!

Too, too perfect.
Posted by Bi-Coloured-Python-Rock-Snake at 10:30 AM

I am embarrassed to say I know one of the supporters. She's a bit "special", sweet, but nuts.

(Hey, your sister gave me that story, it is indeed a problem. I imagine it's worse over seas there.)