When the Obama White House terrified thousands of New Yorkers for a photo op, I figured it was just the sort of mistake that can happen in any new team: everyone figured someone else had thought it through. Then when they said they weren't going to release the photos, I was a bit confused, thinking it was silly to hold them back after the damage had already been done. When people demanded that the flight not be a complete waste, a photo was released, yet another Obot was thrown under the bus, and I didn't think any more about it. Until Ann Althouse encouraged me to look a little more closely at the picture: 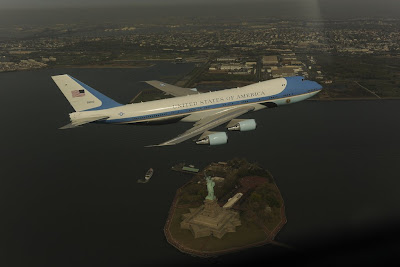 I'm surprised more people haven't come to the same conclusion: the "photo op" story was pure hooey, just damage control. This supposed "publicity photo" is a poorly composed image of the jet against the majestic Jersey shore (when the Manhattan skyline is right on the other side), taken with a point-and-shoot camera from the cockpit of the escort fighter. Not even the White House is foolish enough to spend $328,835 on such a crappy photo. Now I understand why they initially weren't going to release the photos: there weren't any. Let's hope the fighter pilot got an attaboy for handing over his souvenier shot to save their butts.

I don't want to get all "show us the birth certificate" on you, but it really does make me wonder: who was on that plane?

It's possible of course that the real publicity shots, taken by a real camera mounted on the fighters wing, will emerge, which would totally rebut our entertaining little conspiracy theory. I won't hold my breath.
Posted by Bi-Coloured-Python-Rock-Snake at 7:01 PM

Email ThisBlogThis!Share to TwitterShare to FacebookShare to Pinterest
Labels: hoaxes and conspiracies, obama

Oh, come on--might as well do a little cloak-and-dagger. What are the theories about who was on the plane and why? (I haven't been following the aftermath of this story very closely.)

Well, it seems like the most popular speculation is that it may have been a thank-you sightseeing flyby for wealthy donors.

A popular suggestion is that it was Joe Biden on a thrill ride. (The White House denies it.)

It seems to me far too little to get your cackles up for. We have never been otherwise all that concerned with the comings and goings of the military escort vessels, this one just made some guy in "The Cubicle That Will Never Forget" let out a squirt in NYC, big deal. We have to put it in perspective, this flight could've gone completely without notice over any other city's skyline and the looking glass would narry a warble.

I vote for the bodies from Area 51.

Or Zombies. Zombies would be good.

It was clearly the Obama himself, vicariously reliving past glories of his people....wait, he's a Christian, isn't he???

Gotta admit, I like the Biden theory. He needed the direct experience in order to more accurately recall and relate the daring story of his, alas, failed attempt to stop the 9/11 bombers. Known to only a few, there was a parachute trailing out of the jetstream of the first plane. It has been systematically airbrushed out of all photos of course.