The Death of Federalism

How much does it say about the death of federalism in America that it should seem perfectly normal that we know far more about national races in far-off Washington than about the candidates for positions in our own hometowns. This card from PostSecret says it all: 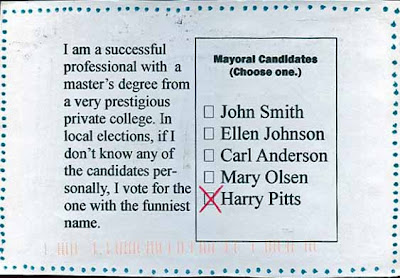 We don't care about local elections because they just don't matter very much to most of us. Can the anti-federalist ratchet ever be turned back? Is it even possible to devolve power back to the state and local level? It's not very hopeful. Look at No Child Left Behind: everyone agrees it hasn't entirely worked, but nobody's suggested returning its power to the states. You can bet that either a McCain or an Obama administration's "reform" of NCLB would aggregate more power to Washington to regulate education, not less.
Posted by Bi-Coloured-Python-Rock-Snake at 2:02 PM