Our detail on Thursday, the last day before the Presidents' Day four-day weekend, consisted of moving equipment from one maintenance bay in the motor pool to another, then reversing the process. Basically, the unit is moving to the identical bay next door, and moving everything from that shop into their old one. In the process, we separated out all the recyclable scrap we could find, and "acquired" anything useful for the new shop. There were also a a few classic moments in soldiering. See, the sergeant in charge was in and out all day, which led to the very dangerous situation of Specialists making judgment calls. This inevitably led to the sight of a dozen soldiers standing around a pallet crate, spending inordinate amounts of time in debate over the best way to lift it without letting the bottom open and spill unidentified parts all over the place. Because, of course, nobody knew where the keys for the forklift were to be found and a simple pallet jack would have just made everything far too easy. In the end, though, things got moved, floors got slept, relatively little was broken or stolen, and so we actually got thanked for our efforts by a famously ill-tempered Sergeant First Class.

I think this picture is probably the best summary of the day: 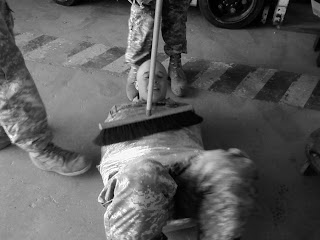 A dozen or so junior soldiers + no supervision + industrial cling-wrap = PRICELESS.

Posted by Bi-Coloured-Python-Rock-Snake at 12:42 PM