We've been hearing all about the Somali pirates. I've written a bit about them myself. But something struck when I looked at the Somali coast on this map of attacks: 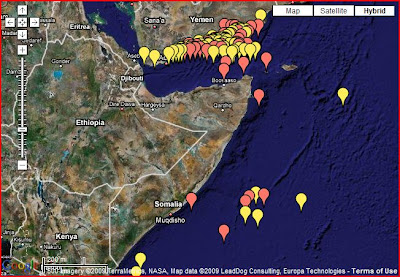 All the news stories speak of these attacks occurring off "the Somali coast". Thing is, most of them are happening practically in sight of Yemen. I don't really know what to make of that. I suppose the ships are probably just crossing to the other side of the street, as it were, and the pirates are just going where the ships are, but at least some of the pirates are Yemeni, and many more seem to be funded or supplied from Yemen. It still seems a touch strange that this situation isn't being made clear. Is it just easier to blame the chaos of Somalia, or is there a particular reason Yemen isn't in the spotlight on this?
Posted by Bi-Coloured-Python-Rock-Snake at 7:08 PM

Email ThisBlogThis!Share to TwitterShare to FacebookShare to Pinterest
Labels: pirates

Veeeeery interesting. Brings to mind the adage about hearing hooves and looking for horses rather than zebras.